ACCULINNA separator  is in operation since 1996. High intensity primary beams of 7Li, 11B, 13C, 15N and 18O with energy values ranging between 32 and 50 AMeV are delivered by the U- 400M cyclotron to the production target of the separator.  The secondary beams of 6He and 8He nuclei with energies of about 25 AMeV allowed us to gain new insights into the structure of neutron halo nuclei through the study of one- and twoneutron transfer reactions made with hydrogen and helium targets.

no images were found

Such beams offer favorable conditions for the production of so far unknown particle-unstable nuclei beyond the neutron drip line. For this purpose one could use one-step one-proton and two-neutron transfer reactions occurring when either 6He or 8He projectiles bombard light targets. Due to a simple mechanism of nucleon transfer between colliding nuclei, one could anticipate for these reactions higher crosssections and smaller background as compared to transfer reactions with conventional beams. The observation of a resonance state of 5H made with the separator ACCULINNA using one-proton transfer 1H(6He,2He)5H is one example, which proved the potential of radioactive beams in this field. The use of a tritium target in relevant experiments could give a new dimension for the investigation of light neutron-drip line nuclei. One advantage of the tritium target is an extremely high energy release obtained for a proton pick-up reaction. An outstanding example is the reaction 8He + 3H → 7H + 4 He. It is, perhaps, the best one among the very few other reactions, which one could use to study the superheavy hydrogen isotope 7H. The system 8He + 3H is notable for the absolute record in terms of the neutron excess. As a result of two-neutron transfer from triton to 8He, 10He and proton could be obtained in the reaction exit channel. The present paper reports on the upgrade of separator ACCULINNA, which allowed us to enhance the radioactive beam intensity and purity and to use a tritium target in experiments.

The separator ACCULINNA is installed at a primary beam line of cyclotron U-400M.

The achromatic ion-optical system (see Fig. 1) is optimized for focusing fragments emerging from the production target, placed in the object plane F1, to the achromatic focal plane F3. The desired secondary beams are separated according their magnetic rigidity with the aid of magnets D1 and D2. A wedge-shaped degrader installed in the intermediate dispersive focal plane F2 helps to remove background from the selected beam. Beryllium wedges with mean thicknesses ranging from 55 to 370 mg/cm2 have been manufactured to replace the aluminum wedges being in use up to now. This increased the secondary beam intensity by a factor of 1.2. The maximum increase (by a factor of 1.5) was obtained for a 8 AMeV 8He beam delivered to focal plane F3. Essential is that the production target withstands the maximum primary beam currents, which is up to 10 pμA. In case of 35 AMeV 11B ions hitting a 350-mg/cm2 stationary beryllium target cooled with water the maximum beam current could be 2 pμA. The new rotating beryllium target cooled with water allowed us to move the current limit to 5 pμA, at least. Wheels of 50 mm in diameter rotating with a speed of 2 turns per second worked well at this beam current at the target thickness ranging from 92 to 720 mg/cm2. The separator upgrade caused an extension of the beam line. This was implemented through the use of two doublets and one triplet formed by magnetic quadrupole lenses (lenses from Q9–Q15 in Fig. 1). The target intended for secondary beams was moved from the plane F3 to the plane F4 located beyond the 2-m concrete wall of the U- 400M hall. As a result, the radiation background around the reaction chamber was reduced drastically. An important acquiring was the possibility to work with neutron detectors in the proximity of the reaction chamber. Another upgrade consisted in the increase of the secondary beam capture solid angle. This was reached by means of cross-shaped vacuum pipes installed in quadrupole lenses Q1– Q15.Finally, the primary beam focusing was improved to secure a 90% transmission to a 5-mm spot located in the plane F1 where the production target is placed. The acquired ion optical separator parameters are presented in Table 1. 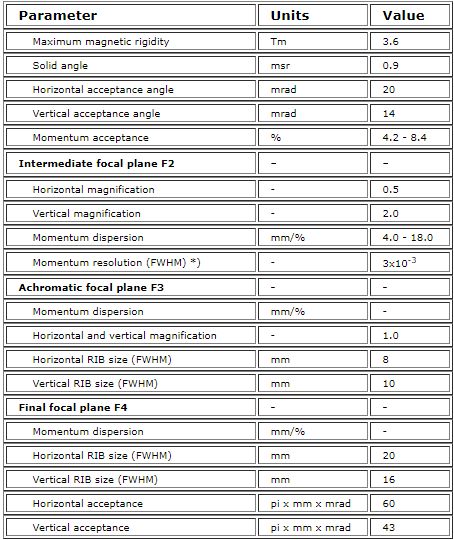 We tested the upgraded separator with a beam of 35 AMeV 11B ions bombarding a 350 mg/cm2 thick beryllium production target into the beam spot 6 mm diameter. At a primary beam intensity of 2 pμA we focused in a 2.0-cm circle in plane F4 6*105 6He ions with energy 25 AMeV. The number of 8He ions delivered to plane F4 will be by a factor of 80 less than the one obtained for 6He. Primary 7Li ions routinely accelerated at U-400M to energy 34 AMeV are by a factor of 5 more effective than 11B for producing the 6He beam. Thus, from the point of view of maximum beam intensity for 6He and 8He ions the optimum primary beams are, respectively, 7Li and 11B. Assuming an intensity of 10 pμA for any of the two beams, we estimate intensities of 107 and 3*104 s-1, which one will have for 6He and 8He beams, respectively. The extension of the separator beam line improved conditions for the time-of-flight (TOF) measurement made for individual ions on an 8.5-m flight path between the focal planes F3 and F4. The TOF measurements made for individual beam ions with a resolution of 300 ps (FWHM) leads to a precision of 0.5% in the energy determination. In case of fragmentation 35 AMeV 11B primary beam momentum spread of the secondary beams measured by the TOF method was fixed on 4.8% and 4.2% (FWHM) for 6He and 8Li, respectively. Another advantage of this straight line is that, by placing the diaphragm in plane F3, the secondary beam selected for delivering to the target is additionally purified. With an 8-mm diaphragm in the plane F3 we transferred to F4 as mach as 60% of secondary 25 AMeV 6He ions. The admixture of the main common contaminant beams of 3H and 8Li were at a level of 7% and 13%, respectively. In Fig. 2 the horizontal and vertical phase space diagrams of the 6He beam at the F4 focus plane measured by two multiwire proportional chambers installed at the distances of 90 and 25 cm before physics target position F4 respectively were shown. The capture solid angle extracted from these data was measured to be of 0.9 msr for 6-mm primary beam spot on the beryllium target. The beam sizes on the physics target F4 were equal to 20 and 16 mm (FWHM) in the horizontal and vertical directions, respectively, and the angular divergences were of about 0.75° (FWHM) in both directions.

Fig. 2. The upper left and right plots show the two-dimensional transverse phase space diagrams, respectively. Below them one can see their projections on the corresponding axes.

We designed and manufactured a liquid tritium target to be used in the study of hydrogen and helium isotopes lying beyond the neutron drip line. A 0.4-mm thick tritium target cell was equipped with 10 μm stainless steel entrance and exit windows hermetically welded to the cell body. For the sake of safety this cell was embedded into a protective volume also supplied with 10 μm stainless steel windows. The window diameters were 10 and 20 mm, respectively. The target structure allowed one to detect reaction products emitted in forward and backward directions within two cones with full opening angles of 90°. The space between the walls of the target cell and protective chamber was pumped to a stationary pressure of 106 mbar and was open to a Ti getter having a capacity large enough to absorb the whole tritium in an emergency case. The destruction pressure of the 10-mm target windows was ~20 bar. In real operation conditions the gas pressure in the target cell did not exceed 1 bar. Hydrogen isotopes were stored on 238U in a chemically compound state. The residual gases were released to fill a standard evacuated volume connected with the target cell to a maximum pressure of 1.0 bar. In the case of tritium, this was achieved by heating the uranium source to 680–705 K. When the target was cooled to 18–21 K a gas pressure of 250–300 mbar was set in this volume. The gas recovery proceeded through reverse absorption on the uranium source cooled to room temperature. The stainless steel bottle containing the tritium source was inserted into a protective volume evacuated by an autonomous Ti getter. This volume, as well as one housing the target cell, made the second barrier for tritium leaks. The third barriers were the reaction chamber and a separate chamber, in which the tritium source inserted into its protective volume were installed. Separate oil-free pumps served as the two third-barrier volumes. Pipelines connecting the source with the recovery system and reaction chamber had two protection barriers. The outlet gas purity monitors were coupled to additional tritium absorbers to guarantee the safe operation of the whole set-up.

The beam line of separator ACCULINNA was used to deliver a triton beam accelerated by the U- 400M cyclotron to the tritium target. Using diaphragms and slits set in positions F1 and F2 we reduced the angular divergence and energy spread of the primary triton beam to FWHM values of 7 mrad and 0.3 MeV, respectively. Finally the triton beam with a typical intensity of 3*107 s1 was focused to a halo-free 5-mm spot on the tritium target. The total beam energy, 57.5 MeV in the medium target plane, and the beam energy spread, 330 keV, were estimated in independent ways from the separator tuning and by measuring tritons elastically scattered from target nuclei (tritium, hydrogen and iron). The 5H systems could be formed as a result of 2n transfers in t + t reaction. We used two detector telescopes for charged reaction products. In addition, we used 49 scintillation modules of the TOF neutron spectrometer DEMON for the neutron detection. The first telescope intended for higher energy products (e.g. protons with energy < 35 MeV) involved one 400-μm and two 1-mm thick Si strip detectors and a 7-mm thick Li drifted Si detector. The telescope was set to detect reaction products emitted in an angular range of 18° ≤ θlab ≤ 32°. The second telescope consisted of one 70-μm, one 400-μm and two 1-mm thick Si strip detectors. It was optimized to detect relatively slow tritons originating from the 5H decay and covered an angular range of 15°≤ θlab ≤ 39°. The array of DEMON modules installed behind the triton telescope at a distance of 2.5 m from the target covered angular range of θlab = 37° ± 19°. Data acquisition was triggered when time correlated signals appeared from the two telescopes. Thus, using the stored raw data we could analyze events where a proton, triton and neutron originating from process t + t → p + 5H + p + t + n + n were detected. The missing mass energy spectrum of the 5H system was produced as a result of analysis made for the proton energy measured at different angle with respect to the beam axis. The instrumental resolution achieved for the searched 5H resonance states was about 400 keV.

The separator showed reliable operation parameters during the one-month period of the t + t experiment. The beam energy was stable within 0.2%. The absolute value of the beam energy was determined with the same accuracy from the known magnetic rigidity of the second separator dipole (D2). This will be valid also for the mean energy of secondary beams (e.g. the beams of 6He and 8He nuclei). The instrumental resolution (~ 400 keV), which was achieved in the study of 5H resonance states, is typical for other reactions planned with 6He and 8He projectiles. The feasibility of experiments made with this resolution is guaranteed by precise measurements of energy and angle made for reaction products emitted from the target. Angular measurements will not limit the resolution because tracking the trajectories of individual incident ions allows one to measure the trajectory angles for reaction products with an accuracy of 0.2°.