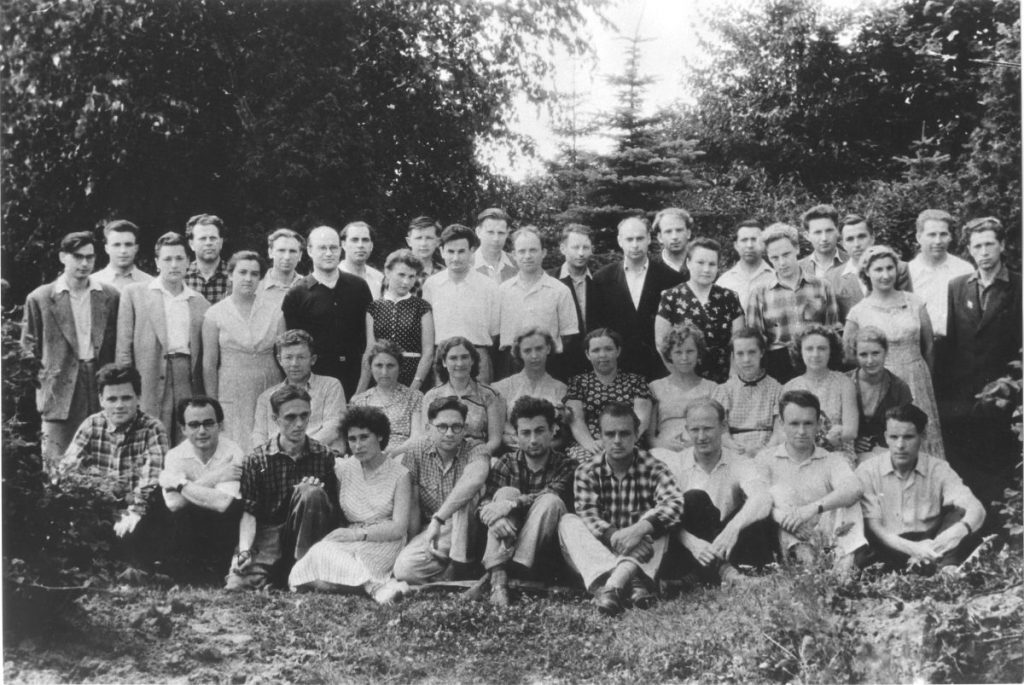 At that time many people were interested in whether the nuclear chain reaction was possible at all. G.N.Flerov and L.I.Rusinov tried to realize the chain process of uranium fission experimentally. And
though they didn’t succeed in it the results they got were very important. They allowed to determine the key parameter of chain reaction – a number of secondary neutrons in uranium fission. This experiment originated G.N.Flerov’s nuclear fission great research.

Then the question of investigation of uranium naturally occurring isotopes fission (uranium-238, uranium-235, and uranium-234) under the influence of neutrons of different energy has arisen. G.N.Flerov and K.A.Petrzhak undertook the series of experiments that allowed to watch a new kind of nuclear transmutation- uranium spontaneous fission. This fundamental discovery made by the soviet scientists in 1940 was included in textbooks and monographs, and turned out to be the starting point for the new field of nuclear physics.

From the very beginning of the Great Patriotic War G.N.Flerov joined Leningrad citizens-in-arms. Later he was delegated to Ioshkar Ola to become a hearer of the Academy of the Air Force. Here he never stopped ruminating on the problems of nuclear fission, on creation of new and dangerous weapon to curb the fascists.

G.N.Flerov appealed to the USSR Academy of Science, located in Kazan that time, to give him an opportunity to report to specialists. Late in December 1941 he went to Kazan and laid his ideas on the importance of investigation of fast-neutron chain reactions before Academicians A.F.Ioffe, P.L.Kapitsa and other physicists.

From the end of 1942 on Georgi Nikolaevich worked with I.V.Kurchatov. He contributed greatly to investigations devoted to strengthening the national defense and foundation of nuclear power engineering of the Soviet Union.

After the war G.N.Flerov continued his research into nuclear fission, performed the cycle of experiments to study cosmic rays fissile components. That time he paid much attention to application of nuclear physics methods to the problems of oil prospecting and rational development of oil deposits. Working at Moscow Oil Institute for several years from 1951 he developed original pulse method of neutron logging.

From the year 1953 on G.N.Flerov’s scientific interests almost entirely belonged to the new direction of nuclear physics-investigation of compound nuclei collision and the fundamental problem of synthesis of new elements.

In 1954 the first experiments on nitrogen ions acceleration using 150 centimeters cyclotron of Moscow Institution of nuclear energy were performed. In 1955 on G.N.Flerov’s initiative the work had been commenced on creation of powerful source of multi charged ions. And in 1955 for the first time in the world history at Moscow Institution of nuclear energy they got the intensive monoenergetic beams of ions of carbon, nitrogen and oxygen with energy exceeding the heaviest nuclei Coulomb barrier.

The years 1955-59 were devoted to study of peculiarities of compound nuclei reactions.

In 1956 the series of experiments aimed at the unknown yet that time element with atomic number 102 was started.

New direction success attracted much attention. So on the initiative and under the active support of Academician I.V.Kurchatov it was decided to expand the front of research on heavy ions beams.

For these purposes in the Joint Institute for Nuclear Research in 1957 on the basis of accelerator build especially for development of heavy ions
beams the Laboratory of Nuclear Reactions /LNR/ was organized with G.N.Flerov at the head .

Already in 1953-1955 it was clear to G.N.Flerov that heavy ion research was not possible to the full extent without some new and special facility. But the main principle of such a facility was absolutely unclear. Georgi Nikolaevich declined the line accelerator (accepted by american scientists) and chose the absolutely different concept: the cyclotron method to accelerate heavy ions. So it was already in 1960 that at the Laboratory of Nuclear Reactions in Dubna the heavy ions accelerator – 310 centimeter cyclotron was put into operation.

Of all variety of research directions of heavy ion beam nuclear physics Georgi Nikolaevich chose as the main one of the most principal and difficult: synthesis of transfermium elements on the border of nuclear stability.

On the basis of well-developed experimental technique and results of study of compound nuclei reaction mechanism in 1964-1975 under the guidance of G.N.Flerov new elements with atomic numbers 102, 103, 104, 105, 106, and 107 were synthesized. Their chemical and physical properties were investigated.

In 1961 under the guidance of G.N.Flerov a new kind of nuclear isomerism namely spontaneously fissionable isomers were discovered. In 1962 in the Laboratory of Nuclear Reactions of JINR a phenomenon of delayed protons emission was discovered; and in 1966 – delayed nuclear fission following beta-decay.

On Georgi Nikolaevich’s initiative the study of neutron-rich isotopes of light elements was started. Such heavy isotopes as 20C, 22N, 24O had been watched.

G.N.Flerov contributed much time and energy to constant development and improvement of the Laboratory accelerator complex, research facilities for works in the field of heavy ion physics. As a result a new generation of heavy ions accelerators had appeared in the laboratory: early in seventies U-200, 200-centimeter isochronal cyclotron was built, later U-300+U-200 tandem cyclotron and at the end of seventies U-400, the largest isochronal cyclotron were brought into operation. Its magnet poles are 400cm across diameter.